A downloadable game for Windows

Note: The game is absolutely FREE to download. Any and all money contributions will go to the further development to the game.

- NOTE: Project is currently halted, so don't expect any new updates. Have fun!

Tamarrion is a 3rd person hardcore action-RPG where the only goal is to fight against enourmous boss monsters. It is a prototype that is currently being developed by a small team of Swedish students.

Tamarrion takes place in a fantasy world that has been peaceful for centuries, but with an ancient evil awakening again the gods must call on a champion. Tamarrion must alone face enormous boss monsters that no other human could match.

The main goal of the game is to fight against enormous boss monsters. At the moment we have one boss fight implemented and we are working on adding several more.

Utilize the spells available to suit your own play style (there are many more being planned for). The spell system is skill shot based, giving the player more control and an increased challenge.

By using spells you can call upon the gods to unleash powerful special abilities to aid you in battle.

The game is a PC compatible prototype that is played with a mouse and keyboard. Please tell us what you think on our Reddit!

Flamy, a Dragon1 year ago

Would love to play this game through the itch launcher, but as you haven't flagged the download as compatible for any platforms, that's unfortunately impossible.

OKAY SO
I love, love, LOVE this game! The graphics are great, it runs really well, and the combat system is amazing.  Though, I have quite a few things to say, so uh
Prepare or something????:?
.

Well, for starters, the enemies are extremely bland, only having one attack. Plus, their attack range is WAY too wide, so making it narrower, but faster, is a good move. Then of course is the inventory stuff. You need to be able to actually equip things, you know. There's also the problem of trying to open the settings and being unable to, so PLEASE fix that! There should also be a block feature to help defend from physical attacks.
The mouse sensitivity is also way too high, fix that also please.
ANYWAY, on to the magic.
So,  The cooldowns are way too short, maybe make them longer. Slot 4(I can't remember the name off the top of my head) needs a stronger healing buff, because it does absolutely nothing  except teleport you.
Aside from all these, it's an amazing game. Can't wait to see more!

Thank you so much for your constructive criticism and your heartfelt comments. Unfortunately we're no longer developing this game as the team split apart after our education was done a couple of years ago.

I did a Let's Play of this game and I completely loved it! :O

This game is gonna be the next Dark Souls, I GUARANTEE YOU that! It's so fluent, so immersive, so intense! Ahhh! I absolutely loved it! I didn't win the boss on normal, but I will, haha! It's such an underrated game! I'm really looking forward to the full release and for new updates! Whenever you need someone to test it out, you know who to call! DO NOT change anything, it's perfect like it is! Thank you for creating this game! :D

This is probably the best game I've found while browsing itch.io. Tamarrion has a ton of potential to become something awesome, because it has a great foundation of gameplay elements. I made a video of my first experience with the game, and I also have a review.

Great, fast paced gameplay. You NEED a good strategy or else you're dead. It was a ton of fun to avoid attacks, get a good position, lose it just as quickly, find a new one, get a few hits here and there, and eventually win.

SUPER hard. While this may be a turn off for some, I found the challenge to be a good idea to make the demo have more play time. You need several tries to learn the boss's patterns and develop a strategy to win.

Really solid art. It reminds me of the new look of Runescape, and that's actually a good thing. The mix of realistic and cartoon styles is great for fantasy games.

Female Protagonist. Too few games have a female protagonist (who at least wears clothes)

Spells are fun. Once you learn how the spells work in context of combat, you will be going one after another to heal, move, teleport, shoot your laser, and survive. However, it made melee combat less attractive BECAUSE spells were so fun / accessible.

The Boss is too sudden. I would have liked some weaker enemies to test out the controls on before diving in to the boss fight.

Melee is much less useful than spells. Because you can roll while casting spells, and because spells have such short recharge time, there's not much point to use melee. Maybe remove the ability to roll while casting? That would make spell cancelling a useful function.

The boss cutscene can't be skipped. After I saw it once, it lost its grandeur. It'd be cool if you could skip it after the first time, or just have no scene in the first place (like what Shovel Knight does).

I didn't understand God Powers, though that's okay given the small amount of time to explain things in the demo.

There's only one level.

More than just boss fights. The spell system and combat have so much potential for fighting hordes of weak enemies. It would be so satisfying to lay down the healing ring and watch several enemies' HP drain, or to position myself just right so that one laser kills a horde. Maybe there'd be some harder enemies that would give the player trouble and have weaker versions of the boss's attacks, which would introduce mechanics the boss would have while simultaneously telling the player that the boss will be HARD.

Keep making this awesome game, that's really the main thing I'd like to see. You guys have a pretty clear vision for what you want this game to be, so make it so!

Tamarrion is the best demo I've seen on itch.io. It isn't perfect by any means, but for the small amount of content it has, it is fantastic. I look forward to seeing how it develops!

Sorry, but there is only a Windows version at the moment.

This is UNITY right?

Yes, we use Unity 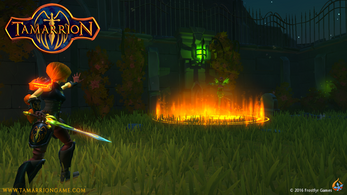 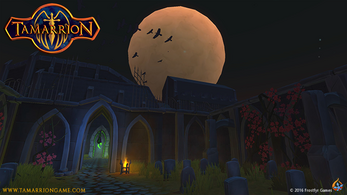 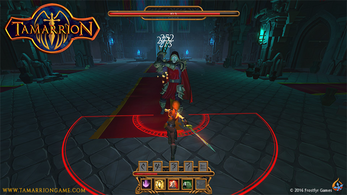 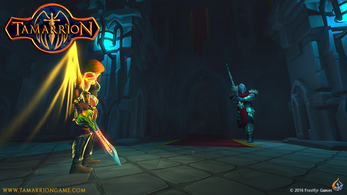